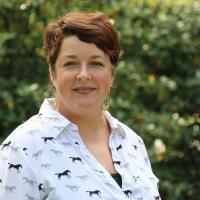 Mindy is originally from Shag Harbour, a small fishing community on the South Shore of Nova Scotia. Her family still lives there so she visits often. Mindy has lived in East Hants, Nova Scotia for the last 21 years and has a strong community connection to the Northern Zone. Mindy is a self-described country girl at heart.

Mindy has completed a Bachelor of Arts in English from Université Sainte-Anne and a diploma in Human Services from Nova Scotia Community College. She has also completed a one-year French Immersion program. When she was a child, she wanted to be a teacher when she grew up.

When asked about her favorite part of the job, her answer is simple: the people.

“I love helping to make the right fit for physicians and their families with one of our communities. It’s so rewarding to know that each physician we recruit makes a huge impact to the overall health of Nova Scotians,” said Mindy.

In her spare time, Mindy enjoys playing the piano and trying out different foods at local cafes and restaurants. She loves animals and spending time in nature and at the beach.

Have questions about living and practicing medicine in Nova Scotia? I am happy to help. Please complete the form below and I will reach out to connect.